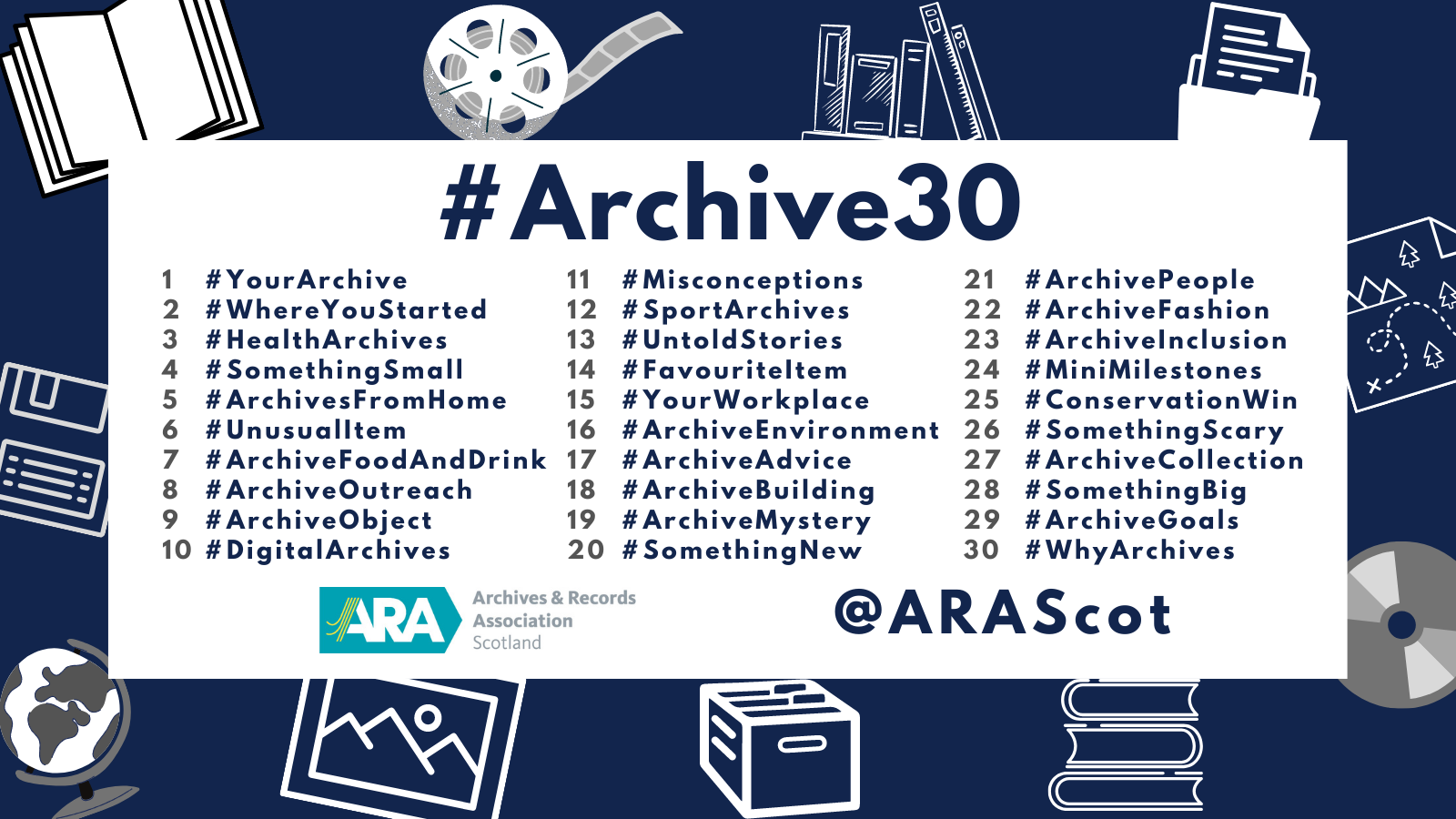 ARA Scotland have transformed April into the major event in the Archivist’s Diary. This month Samantha Case, Social Media Officer for ARA Scotland, gives us insight in what happens to make #Archive30 a success!

April may conjure up images of spring, Easter, or maybe a particular prank-filled holiday for most people, but in the ARA Scotland team it means one thing – #Archive30!

Just what is #Archive30?

Aside from a whole lot of fun, it is an opportunity for people to share their collections and discover new archives and archivists to follow, as well as a chance to get involved with a global social media campaign.

Archive30 was first launched in 2018 as a way to celebrate archives, archivists, and the collections they care for. Topics and themes are posted every day throughout April on Twitter, Instagram, and Facebook – all you have to do is share something from your archive that relates to those themes! This year’s themes are below:

What goes into preparation for #Archive30?
Now that the campaign has been running for a few years, many people/archives know what to expect and look forward to contributing each year, so it is fairly straightforward to set up. We review the themes that were used in previous years and think about which ones were most popular and which ones had fewer contributors. Sometimes there are topics that seemed like a good idea, but weren’t broad enough for everyone to be able to participate. We also consider what new themes may be relevant to current times – for example, this year we added the themes “Archives From Home” and “Digital Archives”. These topics were both increasingly relevant with so many people working from home during the pandemic.

After coming up with our list of themes and reviewing it with the ARA Scotland committee, we create graphics for each day on Canva, as well as an overall graphic with all the themes on it. This is an easy way to share all the themes without creating some kind of cumbersome list, and has the added benefit of being more eye-catching than just a text-based tweet.

Promoting #Archive30 before it actually starts is another important part of running the campaign – this is a fun campaign but does requires a lot of preparation by the people who are posting, so it is always good to remind them that it is coming up in April. We release the topics in March so that there is plenty of time for people to dig through their collections and think about how they can get involved. We do also put out calls for translations of the themes, as the goal is for this to be a global campaign.

How do you review the performance of the campaign?
I track the daily hashtags and the overall #Archive30 hashtag each day using Talkwalker. This tool is free to use but will only show you seven days’ worth of data in the free version, so it is important to track your statistics daily.
So far this year, the #Archive30 hashtag is averaging 133 individual contributors, 1.2K tweets, and nearly a million impressions per day. Some of the most popular themes have been #YourArchive, #ArchiveFoodAndDrink, #UntoldStories, and #FavouriteItem.

There have been contributors from several countries, including the UK, Ireland, Germany, Austria, USA, New Zealand, Spain, Italy, France, and others.

Another important aspect of performance aside from statistics is the overall community feeling in the archive sector that (we hope!) this campaign helps contribute to. Last year we had just gone into lockdown when #Archive30 took place, and it was a massive success with many archivists mentioning later how grateful they were that we were running it as they were still able to connect with people despite having to work from home. It helped the sector feel connected at a time when we were suddenly so far apart and isolated from each other and injected some fun into that period when we were so worried about what was happening in the world.

Overall, #Archive30 makes for quite the exciting month in the archive sector and is a great opportunity to learn new things about archives all around the world!

If you have any questions feel free to get in touch, and if you aren’t already participating in #Archive30, then you have ten days left to get involved!
Find us on Twitter @ARAScot
Follow us on Facebook @scotlandara
Join us on Instagram @ara_scotland