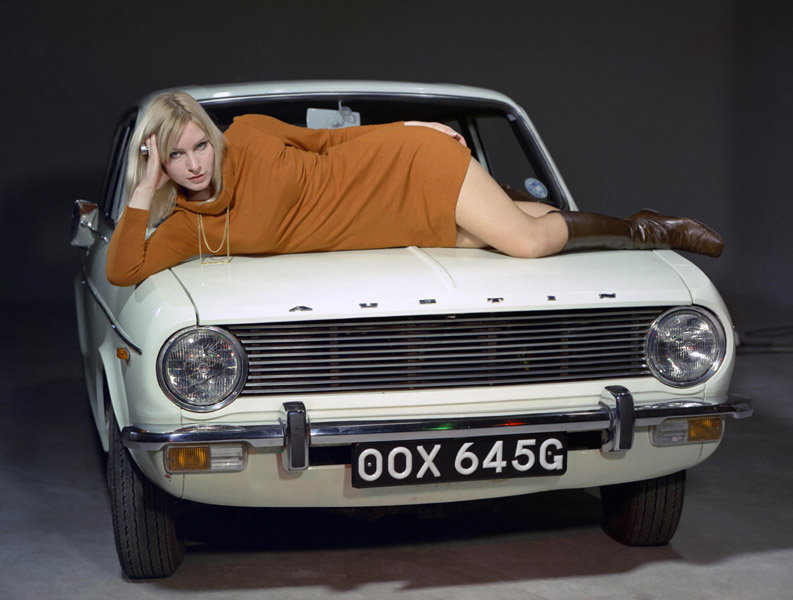 For this month’s blog on the theme of ‘Transport’, Charlotte Gallant of the British Motor Industry Heritage Trust joins us to share some gems from their collections.

When you think about the history of the motoring industry, you maybe think of cold looking individuals in hats driving a rickety-looking contraption from the 1900s or scantily clad women draped over a sports car in the 1970s. You wouldn’t be wrong – both of these elements are in the archive of the British Motor Industry Heritage Trust.

But like any collection – once you look past the financial ledgers, product information and technical details, what you discover is a complex web of social change and civic history. The rise and fall of the British automotive world had a huge influence on families, communities and towns, not just across industrial areas such as the Midlands, but over the entire world.

Our collections go back to the creation of British Leyland Motor Corporation in 1968, a merger which brought together most of the surviving British motor manufacturers; they were themselves results of earlier mergers and therefore encompassed a large variety of firms. These included not just car, bus and truck manufacturers but also some very obscure products – bridges, construction equipment, refrigerators, milk float etc. As a result, the records in the archives encompass a total of 97 different companies which were at one point under British Leyland.

On top of this we also have the records of independent companies, most notably the Dunlop photographic archive and Lucas Industries (formerly Joseph Lucas and Sons). Lucas is one of the most complete company collections in our archive and includes some of our oldest records including finance ledgers from the mid-1800s. It also captures the social side of factory life – children’s’ parties and employee sports days, sometimes featuring some more unusual competitions.

We are perhaps most well-known for our Heritage Certificate service which provides certified copies of a vehicle’s entry in the original factory ledger, showing a car’s specification as it left the production line. There are currently accepted by the DVLA as proof of date of manufacture for tax exemption, but are also popular as gifts, especially for Father’s Day and Christmas. This information comes from the original factory registers which range from the beautifully handwritten to 1980s computer printouts.

Although many of the personnel records of the factories do not survive, lots of information has been captured in the magazines produced for the workforce such as BMC World. These normally describe the most recent events occurring at the factory including factory sports team results, births, marriages, deaths and retirement parties (sometimes detailing the slightly underwhelming gifts received by the retiree). With the help of our volunteers we are hoping to digitize these with OCR so they can be enjoyed by the public and used for family history research.

There are also well over one million negatives in our photographic collection. These range from glass plates from the beginning of the 20th century, to cellulose negatives, slides, prints and transparencies. We also hold a huge amount of film, not only in the original reels but in Umatic, Betacam and VHS format. The film and photographic collection includes everything from the fabulous press shots used in sales brochures to pieces of engine, test runs, publicity shots with celebrities and even staff working in the factories.

We also have a huge collection of press and sales material generated by the motoring industry during the 1960s, 70s and 80s. We were exceptionally lucky to win an Archives Revealed grant in 2018 which allowed us to organize and catalogue this unique part of our collection. Since then, our newly catalogued material has featured in museum displays and online exhibitions (including the recent 40th anniversary of the Metro). It also influenced the creation of reminiscence packs for dementia cafes – which we have been able to donate to care homes surrounding the old sites of several car factories.

Far from being an old collection, our archive is a living organism and is still expanding, not just with donations from the public (which have increased dramatically during the lockdown with everyone having a sort out!) but in how we promote access to our material in the increasingly digital age. The recent pandemic has increased our output on social media dramatically and through likes, shares and comments, has proven that there is an appetite for our material and a lot of expert knowledge to be obtained. Our next challenge to continue this work while restarting and maintaining our regular services.