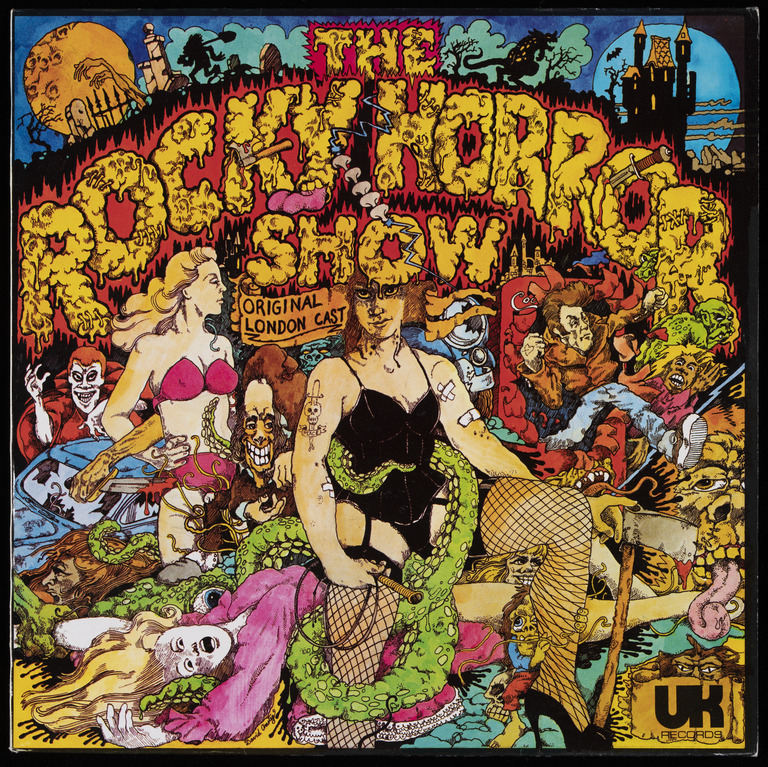 October’s Explore Your Archive ‘in-focus’ blog concentrates on all things spooky. Archivists from the V&A Theatre and Performance Archives lead us on a journey, re-visiting the origins of one of the most iconic musicals of all time.

Discovering The Rocky Horror Show in the V&A Archives.

The Royal Court Theatre Upstairs is a 63 seat venue and experimental studio space above the main theatre. The theatre became a launch pad for some of British Theatre’s most renowned dramatists.

Also, in 1973, this intimate venue witnessed the birth of the seminal cult musical, The Rocky Horror Show.

The V&A Theatre and Performance Archives holds a wide range of collections uncovering the genesis of The Rocky Horror Show.

The show was inspired by a heady mix of B Movie Sci Fi stereotypes, Frankenstein mythology and rock musicals. The story follows all-American couple Brad and Janet and in true horror movie tradition, get a flat tire and visit a creepy mansion house in search of help.

The house is the home of Dr Frank N Furter, a transvestite from the Planet Transexual, in the galaxy Transylvania who is celebrating the birth of his latest creation, Rocky.

The musical was written by actor Richard O’Brien while he was out of work.  O’Brien collaborated with director Jim Sharman and musical director Richard Hartley. Both helped refine the show and bring it to The Royal Court Theatre Upstairs for an initial 3 week run in June – July 1973.

Since the company was established in 1954, the English Stage Company/Royal Court Theatre Archive at the V&A documents the history of all productions at the venue.

The archive includes records relating to The Rocky Horror Show which illustrates the challenges of producing a new show.

The first production was developed with a budget of only £2000 and a small grant of £150 from the Arts Council of Great Britain. This proved a particular challenge for the set designer Brian Thompson and the costume designer Sue Blane.  Their designs created the iconic and much emulated Rocky aesthetic through repurposed second-hand materials borrowed from other theatre companies and businesses.

The photography of Douglas Jeffrey captured the raw, punk style of the original production designs including this fleeting moment in performance history.

Record producer, Jonathan King, saw Rocky on its second night and was immediately impressed with the music.  The archive reveals the negotiation process as King offered a deal to record the soundtrack, supporting the show.

The recording of the original London cast was recorded in the space of 24 hours as King wanted to capture the immediacy of the live show.  The original recording features the 13 songs which were in the first performances, while later soundtracks have additional songs which had been added to the show later in the run. The record was released on the UK Records label with the LP featuring artwork by the show’s designer, Brian Thompson.

The album cover, like the show itself, blends different kitsch elements from science fiction, gothic horror and British burlesque.

The show became an immediate hit.  The files of newspaper reviews kept by the Royal Court illustrate the positive response from critics including the reviewer from The Guardian who noted that,

Reviewer from the guardian

The shows initial run was extended before it transferred to Classic Cinema, King’s Road (14th August – 20th October 1973), and the King’s Road Theatre (3rd November 1973 – 31st March 1979).  Midnight shows were also introduced to give other theatre professionals the chance to see the show after their own performances.

The Rocky Horror Show was made into a film in 1975, The Rocky Horror Picture Show. The film was initially a flop but has since achieved cult status and in 2005 was added to the Library of Congress’s National Film Preservation Board Film Registry in recognition of its influence on Anglo-American culture.

Both the stage show and the film continue to draw in audiences with tours across the world. Continuing to evolve to incorporate the fan’s experience, with elements of audience participation and fancy dress.  The V&A Theatre and Performance Archives includes material from contemporary performances, such as the photography of Graham Brandon, demonstrating the enduring quality of the original designs and concepts of this iconic musical.

The Rocky Horror Show is one of the musicals featuring in the free display Re:Imagining Musicals exploring how some of the best-loved musicals have been adapted, revived and retold.  Re:Imagining Musicals is on in the V&A Theatre and Performance Galleries 15th October 2022 – 27th November 2023. V&A Theatre and Performance Archives will be available to consult at V&A East Storehouse due to open in 2024.

To know more about Explore Your Archive, please visit: https://www.exploreyourarchive.org/

To find out more about the V&A Theatre and Performance Archives, please visit: https://www.vam.ac.uk/info/theatre-performance-archives