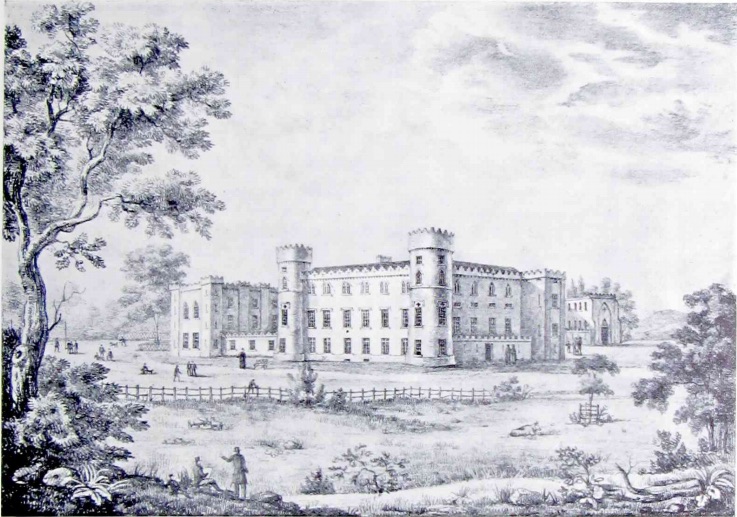 Clongowes Wood College SJ, near Clane in Co Kildare has a long and rich history of education in Ireland since it was founded in 1814 by Fr Peter Kenney SJ. It was the first work of the Society of Jesus worldwide following its restoration that year after 41 years of suppression; indeed the Irish operation predated the lifting of the order of suppression by several months. The college was located outside of Dublin to avoid affront to the British authorities as the Penal Laws remained in force and constraints on Catholic Education were many. The founding fathers had spotted something of a gap in the market; they had decided to educate the sons of the middle class, who previously had the choice of sending their boys to England (with its uncertain religious background) or mainland Europe (which posed difficulties of finance, language, culture and distance). Daniel O’Connell acted as advisor to Fr Kenney, and encouraged him to purchase land that had been confiscated as, with such a property, one could prove title. Richard Reynell, Chief Justice of the Common Pleas under Cromwell, had been granted the castle and surrounding lands in 1667 and the estate was confirmed to him by letters patent of Charles II. Reynall sold the castle and 1,000 acres to Thomas Browne, a Dublin barrister and a Catholic, for £2,100. Browne changed the name to Castle Browne, by which it was known until 1814 when it was changed back to Clongowes by the Jesuits.[1]

The chosen location was a historic one as it was on the line of The Pale and there had been castles on the site since 1450. The new school occupied the relatively modern 18th century version with the entire community of Jesuits and students living in the same building. The Jesuits began to expand the campus almost immediately with the addition of a refectory and a study hall (still in use today) and the buildings continued their march to the south and west over the next two centuries with the addition of dormitories, classrooms, an infirmary and swimming ‘baths’ (the oldest indoor pool in Ireland). Development continues apace in the 21st century with the addition of modern science, art and technology facilities, a large sports hall and a new swimming pool. The college includes a working dairy farm as well as 150 acres of land dedicated to playing fields and recreation space, including rugby and soccer pitches, tennis courts and a golf course and is home to some 450 boys from Ireland, the UK, Europe and further afield.

For more than two centuries, the college has produced many notable alumni including leaders in business, politics, social justice, sport and the arts. Graduates of the college have gone on to become leaders in Ireland and the Jesuit project was encapsulated in one man in 1914, when Old Clongownian, John Redmond was on the brink of becoming the first Prime Minister of Home Rule Ireland. Other prominent past pupils range from the author James Joyce (part of whose novel A Portrait of the Artist as a Young Man is set in the school) to Michael O’Leary of Ryanair by way of rugby international Rob Kearney, Taoiseach John Bruton, Tánaiste Simon Coveney and Fr Peter McVerry SJ, champion of the homeless.

The collection, which has been built up over more than two centuries since the Society of Jesus purchased the property in 1814 from the Wogan-Browne family, comprises papers, visual materials and artifacts relating to the history of Clongowes since its foundation. There are bound volumes of handwritten records from the 19th and early 20th centuries as well as school attendance and examination records, books of account and diaries that were kept by the Rector and Prefect of Studies[2]. There are also copies of various prospectuses as well as some journals and magazines. These include all issues of the school annual, The Clongownian (a valuable historical resource which has been published since 1895) and other occasional school publications since its earliest days. There are photograph albums, VCR tapes, DVDs, maps and floor plans/sketches for building projects.

The collection includes the Exemplification of Title granted to Thomas Browne by Charles II (1682) and various deeds of title for lands and other legal documents (all parchment). There are materials from the collections of previous owners, when the buildings and grounds were in private hands (most recently those of the Wogan-Brownes) as well as items donated by various Jesuits and Old Clongownians. There are also some artifacts of both a religious and a personal nature including an original school uniform and some school caps (c.1850), sundry medals, a chalice, a monstrance, original glass plates of overhead photographs taken from a kite, a Papal Hat (Pius XII), a Rugby International Cap, a penknife belonging to Liam Mellows and a Ceramic Poppy from the Tower of London commemorating World War I. The material is stored in a secure room in the castle, with some of these items on rotating display in a gallery that links that building with the school.

The collection is divided into eight series. The first chronicles the history and involvement of the Jesuit Community both in the school and its hinterland from the earliest days through the changes in the management structure in 1971 to today’s much smaller population of priests and brothers. The second comprises materials relating to the purchase of the castle and grounds and the subsequent development, repair, extension and maintenance of the many other buildings that have arisen as the school has developed. The third series contains documents pertaining to the governance of the college and the Jesuit Community therein and reflects the changing nature of both as the school population has expanded and the Jesuit community dwindled leading to almost exclusively lay control. The fourth is concerned with the Jesuit Ethos in the school, how it has been and continues to be manifest in the pastoral activities of the pupils and the changing emphasis as its custody moves from Jesuit hands to those of their lay colleagues.

The changing nature of education in the school from the initial classical approach of the Jesuit Plan of Studies – the Ratio Studiorum – via the modernising effect of the Intermediate Education Act of 1878 to the modern points based system is traced in the fifth series, while the sixth comprises materials pertaining to the many indoor co-curricular activities such as debating, drama, music and academic presentations, which are fundamental to the original Jesuit plan and still core to the school. The seventh series contains materials relevant to the many outdoor co-curricular activities including athletics, football, cricket, tennis and golf as well as the history of some pursuits that are now extinct such as ‘The Stonyhurst Game’ of gravel football. The final series relates to the financial stewardship of the school from income in the form of fees, government grants and bequests to capital and current expenditure.

It is the intention of Clongowes that the collections in the archive be made as available as possible in line with the principles of access espoused by The International Council on Archives and the profession’s presumption of openness. This approach also falls in line with that of the Irish Jesuit Province to make known the existence of all archives under its control and its proactive approach to access.

The archive in Clongowes Wood College is available to researchers by appointment (045 -868202). Access is normally granted on Tuesdays and Thursdays (09.00-17.00) during the academic year, but other days (and times of year) are possible by arrangement. Records of past pupils are in high demand from relatives researching family history – in particular from the 19th and early 20th centuries. Well known past pupils such as Thomas Francis Meagher, James Joyce, John Redmond and Kevin O’Higgins attract attention from researchers, who may visit the archive in person. Visitors are accommodated in a spacious research room, which also contains a library of history and reference books relevant to the history of the college while further reading material may be sourced from the Jesuit Community Library in the castle.

The archive is currently unavailable to visiting researchers due to the prevailing pandemic. In practice this makes little difference, as actual visits are normally few with the majority of enquiries being submitted remotely by mail or email. In response the archivist does the research and mails or emails the results to those making enquiries and this facility continues to be available during these straitened times.

[2] Prior to the institution of the office of Headmaster / School Principal in 1971, the college was managed by a Rector with the assistance of a Prefect of Studies (both Jesuits). The former was head of the Jesuit Community as well as Headmaster of the School while the latter combined the roles of Assistant Headmaster / Deputy Principal with that of Head of Boarding.