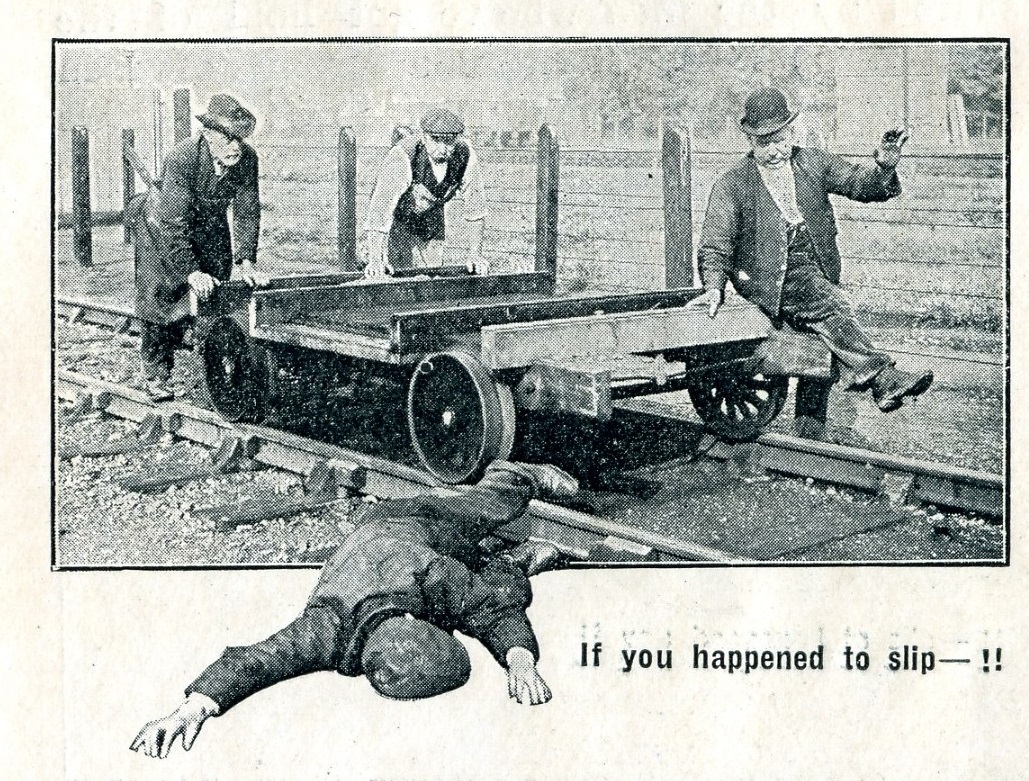 In the UK, before Covid-19 many of us travelled with relatively little thought – whether by private or individual means, or public transport. But during lockdown our habits largely changed – certainly in terms of travelling any distance. As lockdown eases we’re being urged to avoid public transport where possible – and transport workers have paid a high price for their jobs. Bus staff have one of the highest mortality rates, for example, by occupational group. It’s a valuable reminder that whilst travel can be liberating for passengers, it relies on the labour of staff to make possible – and with it come risks.

The ‘Railway Work, Life & Death’  project is looking further back in time, at accidents and ill-health amongst British and Irish railway employees, between approximately 1889 and 1939. We’re a collaboration between the National Railway Museum, the Modern Records Centre at the University of Warwick and the University of Portsmouth, working with The National Archives of the UK. We have small, but dedicated, volunteer teams transcribing and researching the accidents contained within documents held at each of the archives – and we’d particularly like to thank them, as without them, nothing would happen. Collaboration and co-production are at the core of our approach, with our volunteers and with people who are making use of project resources.

We are making the transcriptions freely available via our website, to try to improve awareness and use of this invaluable resource. So – we’re working with physical archives, to create a type of digital archive! To date we’ve made available around 6,500 cases covering 1901-1923, but we’re working on an estimated 70,000 further cases across our period. Details come from accident investigations produced by state-appointed inspectors, railway companies and trades unions. They tell us all sorts about staff working practices, workplace hazards and the individual impacts of accidents in one of the UK’s most hazardous industries.

How does all this relate to travel? Well, in all sorts of ways! As noted, passenger travel would not have been possible without the staff running the railway system. Then, as now, they’re easy to overlook – one of our hopes is to make the working lives and experiences of railway employees more visible. Whilst generally you won’t find passenger travel accidents in our archive, of course staff crewed the trains that were involved, so they do fall within our remit – as in the Reading 1914 accident discussed here . We also encourage guest blog posts, and sometimes they touch upon passenger experiences, as in this example .

Staff travel sometimes appears in the records. Sometimes it was more conventional than others. We know that on 11 May 1911, at around 9.20 in the evening, eighteen-year old Caledonian Railway Company signal lighter (someone employed to keep the lamps on signal alight) G Gray was travelling in carriage near Gourock, in Renfrewshire. He leant out to check whether a signal was lit, but the carriage door flew open and he fell from the train. Fortunately for him, he survived, suffering only scalp wounds. Our database is a litany of staff injured or killed on the move: oiling locomotives whilst running, riding on the outside of wagons, thrown from wagons they were travelling in – even one case in which an employee had his leg, ankle and foot injured when three hogsheads of beer fell on him as he was working in a wagon being moved!

It isn’t just the obvious railway travel which features in our data. The railways at this time had substantial interests in all forms of travel, including road transport. We have accidents involving carts and lorries, both staff and non-staff – plenty of people had reason to be working on and near the railways, like coal merchants, carters and farmers. Porters had to move trollies around stations, often across railway lines, and track maintenance staff used trollies to travel to their point of work, sometimes falling from them. This happened on 15 April 1914, when Thomas Hall and William Turner fell from the trollies they were riding on between Chilham and Wye in Kent, injuring their legs. Hydraulic hoists in stations injured or killed staff who were riding in them against the rules – as in the case of Jane Horner, at Stockton station, County Durham, in 1913 (and discussed further here ). And of course, walking was a key means of travel for workers and is found in our project as a part of the accidents staff experienced.

Staff had to travel to or from work, as well. Sometimes this might involve them getting from the immediate point of ‘clocking on/off’ to where they needed to be – as in the case of Midland Railway temporary goods porter TH Narey, at Shipley in Derbyshire. On 23 February 1911 he was walking on the railway when travelling from the goods warehouse where he worked; he was hit by a train, losing an arm and some teeth. The investigation records that he didn’t exercise ‘necessary care’ but also hadn’t been properly supervised; it seems it was common for men to walk along the line here, tacitly being accepted by the foremen.

These, and sadly plenty more cases like them, all came about – directly or indirectly – as a result of travel. What do they all tell us? By finding out more about the individuals who had accidents on the railways, we can see the true costs of the industry – and travel, of passengers and goods. We can see how work was carried out, often including why staff acted in seemingly counterintuitive ways that exposed them to danger.

What are the next steps for the project? We’re always keen to see where staff accidents appear in the holdings of archives beyond those we’re presently working with – we’ve recently been put on to what looks to be an interesting clutch of compensation records at Doncaster Archives, for example. Finding records like these takes some sneaky searching – and the expertise of the archivists, who might have encountered the sorts of things we’re looking for but which are either yet to be catalogued in detail or where accidents feature incidentally to the main purpose of the record.

In terms of our immediate work, there are an awful lot more records to transcribe! We’re working on that, as well as researching as many cases as possible beyond the records we’re handling. In the longer term, we’d like to produce an interactive map of the cases, to provide a much more easily visualised and accessible entry point. We’re keen to move beyond the records of the formal railway industry – we want to link our material to other records, to make it possible to build a life-story of the individuals involved: newspaper reports, births, marriage and death records, autobiography, and family history. We’d like to build a tool to allow anyone to submit the records they are aware of, including details or stories from within their family. All of this will mean we can piece together a much greater picture of the impacts of staff accidents, and will really improve awareness, understanding and use of the records. Watch this space!

And if you fancy getting involved – in transcription, once we’re able to get back into the archives and photograph records, a guest blog post, to alert us to archives we should know about or something else, please just drop us a line. We’d be delighted to hear from you!