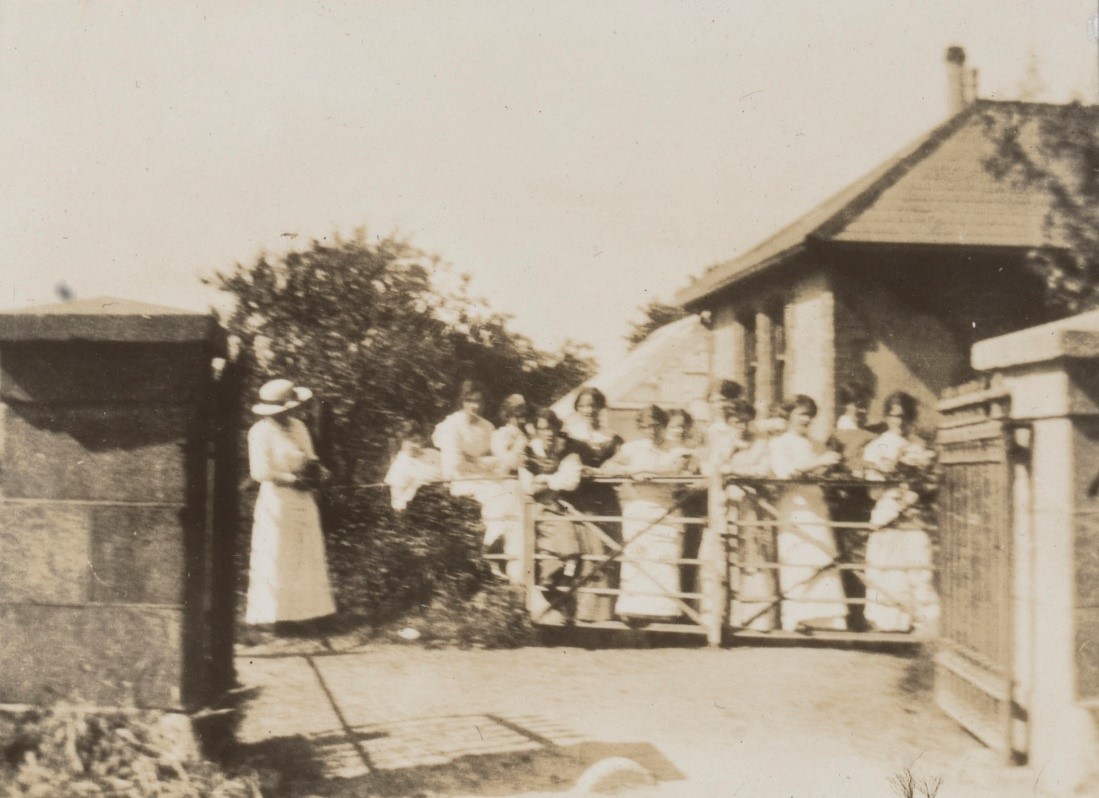 The Cuala Press Project has been contributing to the Explore Your Archive campaign, since its launch in November, to disseminate our unique visual-arts collection to a new and interested audience via our Twitter and Instagram accounts. The theme for Explore Your Archive in March was Business and Manufacturing and this encapsulates our project perfectly. As March was also Women’s History Month, we also wanted to highlight the fact that the Cuala Press is a female-led and female-staffed business. It is unique in that it is the only Irish Press that was run by a woman, employed only women, and aimed to create work and financial independence for Irish working women.

The Cuala Press was founded in Churchtown, Co. Dublin by the Yeats’s sisters, Elizabeth and Susan, in 1908. The Cuala Press began its life as the Dun Emer Press and was part of Dun Emer Industries, established by Evelyn Gleeson (1855-1944) and Susan and Elizabeth Yeats in Dundrum, Co. Dublin, in 1902. Their aim was to employ and train local Irish girls and young women in ‘the making of beautiful things’. Elizabeth Corbet Yeats (1868-1940) trained two people at a time on a printing press, and they gained knowledge of composition, typography, type setting, and ink rolling; they were also involved in the hand painting of the prints and the other material. Susan Yeats (1866-1949) ran the embroidery section and taught embroidery herself. The Research Collections section in the Library of Trinity College Dublin has two major collections from the Cuala Press; the print collection donated through gift in 2019 (TCD MS11574) and the Cuala Press Business Archive (TCD MS11535) donated by Michael and Anne Yeats in 1986. The Business Archive of the Cuala Press represents the output of an iconic female-led industry but also the output of female designers and artists from the 20th century.

Dun Emer Industries and The Cuala Press were, overall, entirely female workplaces. They hired girls and young women, some in their early teens, who having just finished school were given opportunities for a career despite having no prior training or skills. According to ‘Leabhar Dun Éimire’, an in-house magazine compiled by the staff, the business grew steadily; ‘in 1902 there were 13 girls employed, and by 1905 there were 30’. They were paid one shilling and six pence a week as a salary and many of the staff dedicated their lives to working for the Press. Esther Ryan, who was a native of Dundrum, started working at Dun Emer when she was 14 years old when the printing department was established in 1903. She then moved with the Cuala Press in 1908 and worked for the Press until 1961.

The Cuala Press, an important part of twentieth-century Ireland’s cultural legacy, is also an important example of a female-led industry in Ireland in the 20th century. The Business Archive of the Cuala Press includes some minute books of directors’ meetings, cash books, letters, some original drawings for prints, sample books, the printing Press itself, type, designs for embroidery, and some hundreds of printer’s blocks. It also includes time books for the staff and the work they completed. The prints and cards that the Cuala Press produced were reproduced again and again and were economically viable to produce. The original drawings of these form a significant portion of the collection. The archive also constitutes an important research source for many Irish female artists and writers whose work was reproduced by the Press.  The Cuala Press Business Archive and the Cuala Press Print collection are extremely useful and important collections for Ireland’s creative legacy and reflect the imagination and innovation of Elizabeth and Susan Yeats and their dedicated workforce. The Project is funded by the Schooner Foundation, and is a project under the “Ireland’s Creative Legacy” strand of the Virtual Trinity Library.