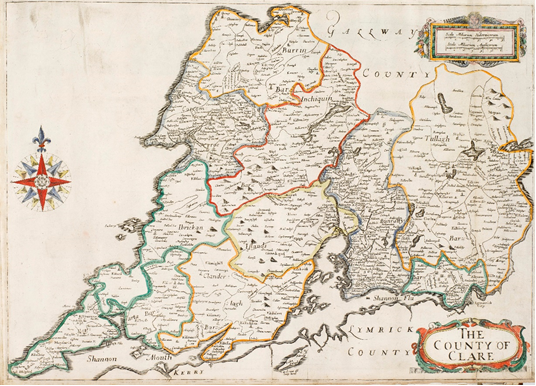 Armagh Robinson Library is the oldest public library in Northern Ireland. It was established 250 years ago, in 1771, by Richard Robinson, Archbishop of Armagh and Primate of All Ireland. Along with the Library of Trinity College and Marsh’s Library, both in Dublin, it is a rare early example in Ireland of a purpose-built library which continues to fulfil its original intended purpose.

The collections which Archbishop Robinson gave to the library include books, manuscripts, coins, medals and fine art. The original collection remains intact but has been added to over the years through donations and purchases. Today there are over 300 manuscript collections. Whilst predominantly dating from the seventeenth and eighteenth centuries, the manuscripts stretch in date from the late twelfth century through to the late twentieth century.

With Armagh City being the ecclesiastical capital of Ireland, there is a strong religious component. There are, for example, episcopal registers and visitation records relating to various Church of Ireland dioceses, as well as the papers of three Archbishops of Armagh, namely John George Beresford (archbishop, 1822-1862), John Allen Fitzgerald Gregg (1939-1959) and Robin Eames (1986-2006). Items relating to local government include records of Armagh Corporation and the indictment records of the County Armagh Assizes (1735-1797). For each assize there is a list of the names of the prosecutors, the defendants, the crimes of which the latter stood accused, and the verdicts given by the grand jury.

Other manuscript highlights include original journals of the Irish House of Commons from the reign of James I, the earliest surviving copy of The Annals of Clonmacnoise (1660) [see here], autograph letters of the author Jonathan Swift and his personal annotated copy of Gulliver’s Travels (1726), papers of the Dublin Physico-Historical Society relating to surveys of various Irish counties in the mid eighteenth century, a census of the City of Armagh taken in 1770, and documents relating to the Irish Volunteers in the late 18th century and the defence of Armagh during the 1798 Rising. Minute books (1813-1911) and other memorabilia relating to the first Apprentice Boys of Derry club, actually founded in Dublin rather than in Londonderry, are also held in the Library. There are also architectural drawings, mainly relating to various buildings in Armagh, by Thomas Cooley (1742-1784) and, for the restoration of St Patrick’s Church of Ireland Cathedral in the 1830s, by Lewis Nockells Cottingham (1787-1847).

The Library’s map collection includes seventeenth-century county maps for the whole of Ireland by William Petty and a set of Ordnance Survey maps for the entire island dating from the 1830s. Digitised examples of other maps from the collection can be viewed in the Library’s online exhibition, ‘Mapping History,’ which was developed in conjunction with Marsh’s Library, Dublin. There is a small collection of newspapers, mainly Dublin titles. Particularly noteworthy among these is a collection of six large volumes collected by Henry Irwin which, arranged by date, comprise approximately 2,200 issues from 1786-1799, and include contemporary handwritten comments and reflections on the news of the day.

The Library’s music collection, which includes early works by Handel, was greatly supplemented by the donation of the music collection of St Patrick’s Church of Ireland Cathedral in 2015. The latter extends to more than 400 volumes, amounting to approximately 4,000 pieces of music, both printed and manuscript, and covering both sacred and secular, instrumental and choral, pieces. Eighteenth- and nineteenth-century composers predominate but the collection includes pieces ranging from Michael Este (East) (c.1580-1648) to twentieth-century composers such as John Ireland (1879-1962) and Herbert Howells (1892-1983).

The Library, which has free admission, is open to the public from 10am – 1pm and 2pm – 4pm on Mondays – Fridays. Those visiting to consult the collections should make a booking in advance by either emailing admin@armaghrobinsonlibrary.co.uk or telephoning 028 3752 3142. When making a booking please inform Library Staff of the Item Number(s) which you are interested in viewing, so the items can be made ready for you upon your arrival.

Finally, the Library has an active exhibition and events programme, which you can keep up-to-date with through social media. The Library uses both Facebook and Twitter. Online versions of the current and previous exhibitions can be found on the Library’s website, while recordings of previous talks and other films can be viewed on the Library’s YouTube channel.