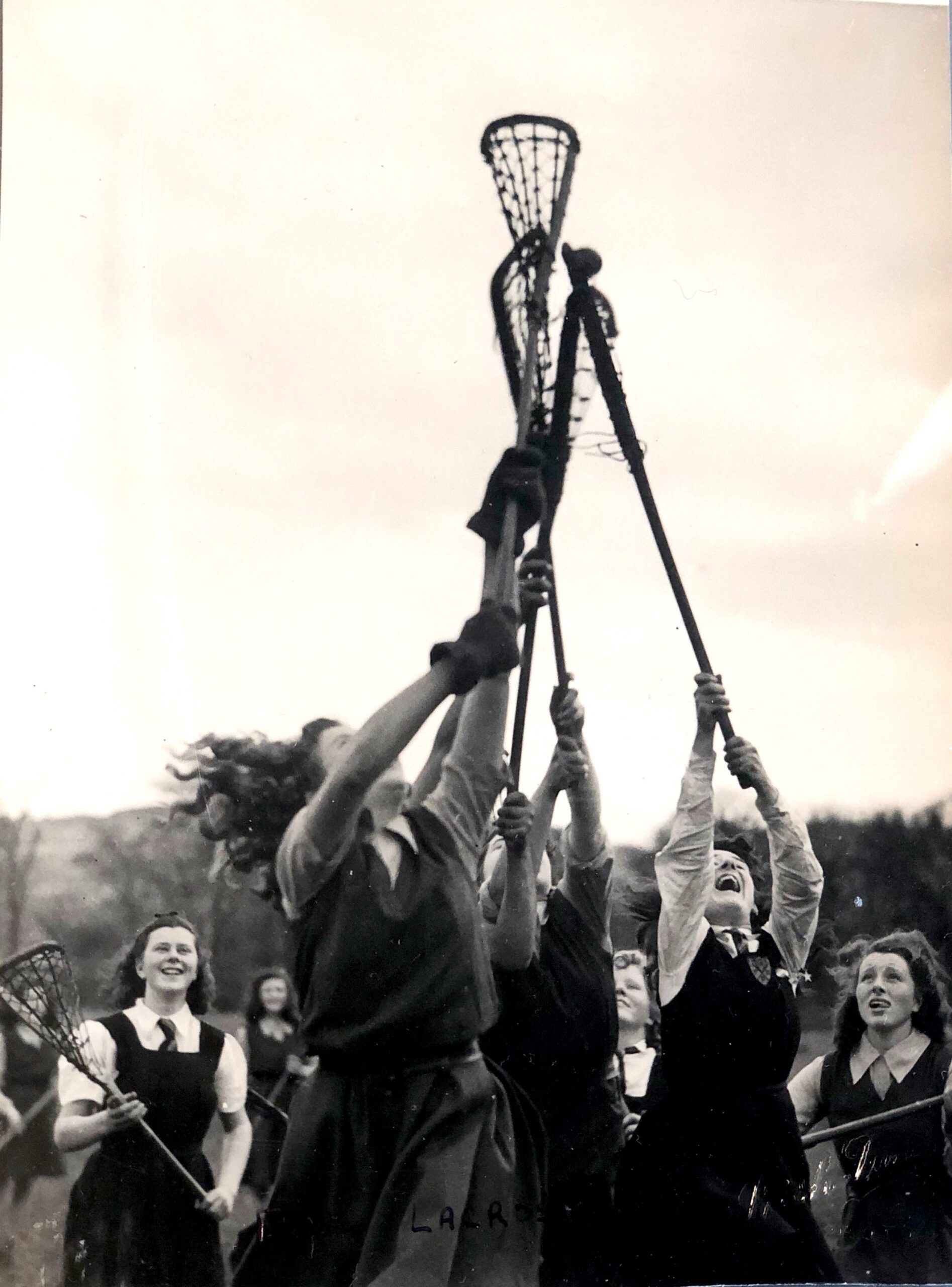 It’s September, which means that students across the UK and Ireland have been going back to school. For this month’s themed blog, archivist Antonia Hart joins us to introduce the The Rathdown School Archive, which incorporates the archives of The Hall School, Glengara Park, Hillcourt, Park House, and Rathdown School.

Crests of all original schools, and Rathdown.

The Rathdown School Archive is a special one. Of course, that’s what everyone thinks about their own archive, or the archive they’re fascinated by, or the archive with which they feel a personal connection. But this one is significant for so many reasons. It’s the school’s history. It sheds light on why things are done the way they are: why there is a pale blue stripe in the V of the senior girls’ jerseys, why March 15 matters, why the school houses have the names they do. Those things are of local and specific interest. But can they be of interest to anyone who never wore the uniform, who never taught a class who wore it? We think so.

Rathdown School is an independent girls’ school in south Dublin. The fact that it’s girls-only, that it’s fee-paying, and that it’s interdenominational, sets it at the heart of some of the most thoroughly discussed aspects of Irish education. The current school came into being in 1973, when three existing schools merged. These were the old-established Hall School, Hillcourt, and Park House School. In 1987 a fourth, Glengara Park, was added, and these four identities were remade into one. For years, the need to pull together as an entirely new body, under a new name, meant that, in particular, the three individual histories of the three original constituent schools were somewhat elided. Two years ago, in 2019, Rathdown decided to mark 100 years of education on the current school campus. These centenary celebrations included an exhibition of school life. It showcased items from the archive: documents, photographs, clothing, sports memorabilia, and objects of material culture, together depicting the life cycles of all four constituent schools and Rathdown itself. As that exhibition came together, as it opened, as it ran, and then had its run extended, as people talked to us about it, we began to realise that it, and the archive which had enabled it, could be a turning point in Rathdown’s relationship with its own history.

That, again, was a sense that was local and specific to those who belonged to the school community. Since then, we have begun to look on the archive through lenses other than the narrow lens of the school itself. It can shed light on the history and development of so many aspects of life in Ireland, and particularly in Dublin, where all the schools were situated. Boarding meant that not every girl (or boy – there were plenty of boys over the years, though only in junior classes) was from Dublin. They came from all over Ireland, and from other countries too. Now, every part of the archive, every photograph, every letter home, every slightly nasty-looking sock, every pair of initials carved into a windowsill, says something, however minor, about the education of girls in Ireland over 150 years. The archive can also speak to the lives of the women, and some men, who dedicated their careers to the education of girls, starting from a time when it was certainly not taken for granted that a girl should be educated.

L-R: Miss Phyllis Palmer, Hillcourt, 1920. Phyllis was a science teacher who had been educated and had taught at Cheltenham Ladies’ College. Phyllis had also spent time teaching science at Wycombe Abbey In 1919 she came to Dublin with her sister Gladys to take the reins at the new girls’ school in Glenageary. Seniority meant that Gladys was known as Miss Palmer, while Phyllis was known as Miss Phyllis. The sisters spent the rest of their careers at Hillcourt. The shadow in the foreground is Kathleen Johnson’s. She was a pupil at Hillcourt in its first academic year, 1919-1920, and kept an album of photographs documenting the year.

Pupil Kathleen Johnson’s cubicle in dormitory 11, 1919-20. The school building was originally a large family house, and Kathleen seems to have got a bed beside the fireplace, which has had a curtain affixed, presumably to keep out the draught from the chimney.

The archive can illuminate the history of sport in Ireland, with photographs, team lists, match reports, and trophies, not to mention some definitely unwashed sports kit, lethally rusty fencing foils, and irresistibly tactile wooden lacrosse sticks. School magazines dating back to 1913 show what was on the girls’ minds while world events dominated newspaper headlines, what subjects and extra-curricular activities were current, what areas of study and work were chosen by girls who had left school. Photographs of dormitories, common rooms, staff rooms and seasonal celebrations give an insight into the more private, non-academic aspects of school life. Maps, plans, and architects’ drawings contain a history of the built environment, and even portraits of the generations of school dogs who lived at each of the schools say something about our relationship with animals. As well all the new areas of research opening up in Irish history generally (like the study of childhood, or girls’ sport), local historians and genealogists are always interested in tracing family histories and the lives of individuals. The Rathdown School Archive can provide rich pickings all round.

L-R: Girls playing hockey in the Hall, 1960; The painting on this traffic light control box promotes women in sport and is part of a public art project across Dublin. The artist @lynn.kennedy. art drew on photographs from the Hall School sports archive; Rathdown girls fencing outside Palmer Hall in 1978.

We are under the usual constraints when it comes to resourcing storage, conservation, cataloguing, digitisation, and all the rest, but we do want the archive to be used and of use, not just by the school, but by the wider community. At the moment, we share what we can over our still-developing social media accounts, primarily Instagram and Facebook. Access at the moment is limited, as it must be everywhere under COVID-19 restrictions, but we welcome enquiries and will always do what we can to help dig out whatever information is being requested. And maybe something unexpected, besides.