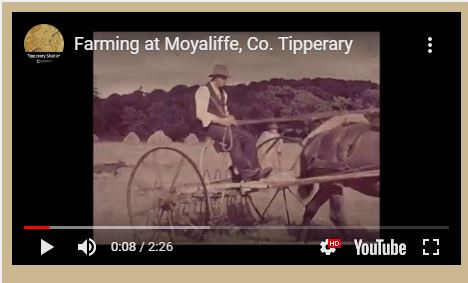 The Kemmis collection is a small collection of film reels ranging from the mid to late 1930’s. The reels, stored in an old suitcase came from Moyaliffe House, which was home to the Armstrong family from the seventeenth century to its sale in 1999. Winona (Jess) Armstrong inherited Moyaliffe following the death of her only brother, William in France in 1917. Jess married Captain William Kemmis of Ballinacor, Co. Wexford in 1927..

The suitcase was given to a local family some years ago and brought in to Tipperary Studies in 2018.  While the films could not be viewed locally, a brief index on some of the boxes suggested the contents might be of social and cultural interest.

The 16mm film was converted to digital format by the DVD Centre, Dublin and with the kind permission of family descendants relevant material was placed online in our digital archive.

The archive is accessible here http://tipperarystudies.ie/captain-william-d-a-kemmis-film-collection/ and contains some footage of farming in Tipperary, horseracing and the coronation