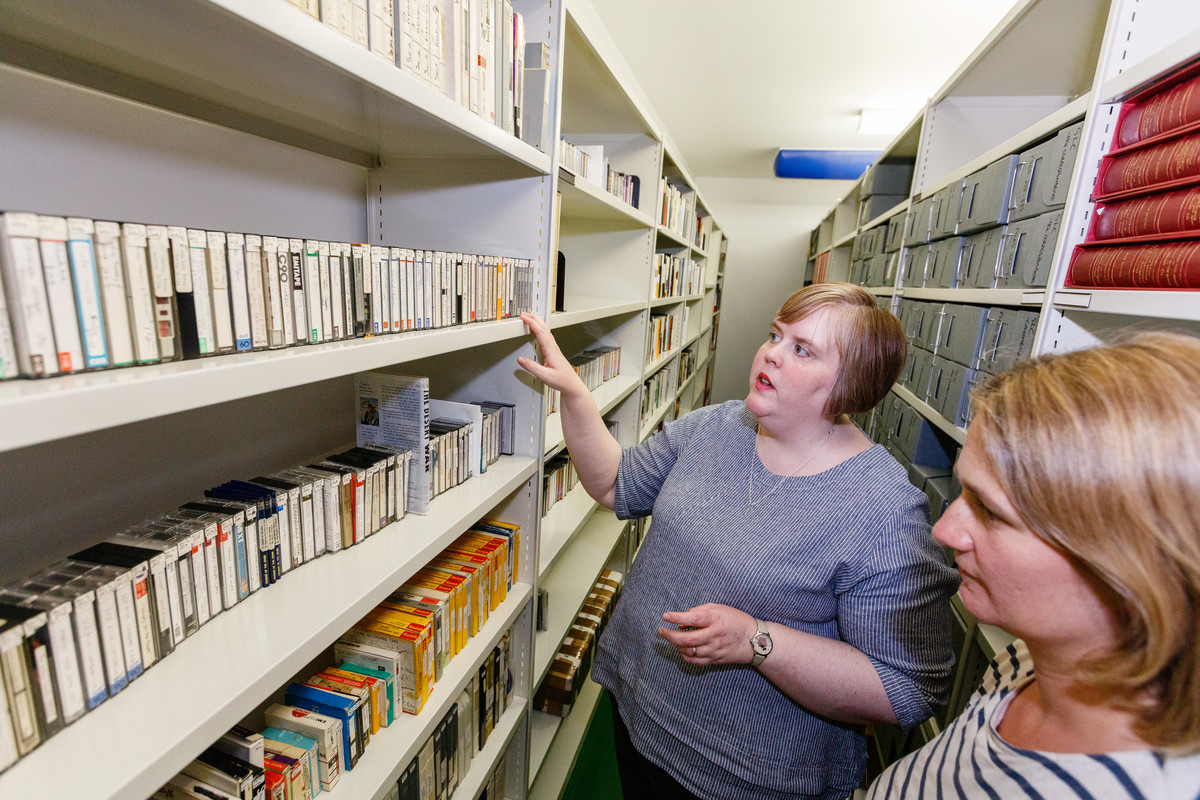 Archivist Stephanie Nield discusses the exciting and pioneering podcast project, which brings to life the archive and sound collections of Leonard Cheshire Archives.

Leonard Cheshire is a UK based charity with a lot of history. This means there are a lot of stories to tell from the Archive. Before I talk about the Resonate Podcast, it’s worth explaining just how much material we have to work with, and why.

The story starts in 1948 with our founder, Group Captain Lord Leonard Cheshire VC OM. Leonard was a 30-year-old retired RAF Group Captain. He was famous for being awarded the Victoria Cross for his role in Bomber Command during the Second World War. He struggled to re-adjust to peacetime though. Through a series of events he began to inspire communities to build homes and provide facilities for local disabled people. This idea spread from the UK first to India and then all over the world.

The Leonard Cheshire collection includes sound, film, and photography, as well as the personal collections of the founder and his work.

The sound collections in our care are based on the Cheshire Sound Library. The founder set up the library at Le Court Cheshire Home in 1973. Two residents (and radio journalists) Peter Courchee and Nigel Mackenzie manage the collections. The recordings of the speeches of Leonard Cheshire and Sue Ryder make up the library. They include Leonard Cheshire’s speeches on his wartime career.

Furthermore, Leonard Cheshire was very interested in film. He was friends with Hollywood film director David Lean. He even set up the Ryder-Cheshire film unit to produce films about his work. The soundtracks of these films often made their way to the Sound library. Episodes of the Cheshire Voice also ended in the sound library. The Cheshire voice is a sound magazine created by and for residents of Leonard Cheshire’s care homes.

There have been two oral history programmes compiled at the Archive. One was gathered in the 1990s after Leonard Cheshire’s death. The other was put together in the late 2010s as part of a National Lottery funded programme, ‘Rewind’. The latter opens up our archives to residents living in Leonard Cheshire care homes in the South-East of England.

The importance of the sound and film collection, and the urgency to preserve and digitise the Sound Library resulted in a new project.

The Resonate Project involved the digitisation of 256 sound recordings. The National Lottery Heritage Fund and the Foyle Foundation enabled us to do so. Topics covered included the impact of the Second World War, the disability movement and the development of disability charities both in the UK and globally.

The project has helped reduce the possibility of the recordings deteriorating and being lost forever.

‘If the subject were just Leonard Cheshire’s wartime experiences then it would be interesting enough, but the longer story of seven decades of support for disabled people and all this has entailed is remarkable.’

During the ‘Resonate’ project, we decided to start a podcast about the Leonard Cheshire Archives. We knew we would have a lot of digitised recordings, and we wanted to have a different way for our audience to discover them rather than searching on our website. Our podcast was only going to run for three episodes, but it became apparent there were many more stories to tell, and we decided to carry on after the project ended.

So far there are 6 episodes; topics range from more ‘archival’ themes such as project updates to interesting stories from our archive about our founder and his work. Most recently I interviewed someone from Ryder-Cheshire Australia to talk about his work in India!

How we made the podcast

We created the podcast by recording and editing content using the free software Audacity and VLC media player. We record it using our headsets, but you can also get lapel microphones, which give a much clearer sound, relatively cheaply. The program Teams enables us to record the interviews. We then extract the soundtrack from the film using VLC media player, before editing the recording in Audacity. We have been experimenting with captions and editing film in the MS app Stream, which has worked quite well, especially for putting the video version of podcast episodes on our intranet.

At the archive, we decided to host the podcast on YouTube. We want the podcast to be as accessible as possible, which is not achievable on most podcast apps. For each episode on YouTube, we create a short, captioned film. We kept the podcast recording short as well – the way I approach it is that it should be as long as a tea break, so around 15 minutes.

As part of the process, we learned that the key to getting an audience for your podcast is distribution. We discovered the app Anchor, which is free and will distribute your podcast to different listening apps automatically. If you want to start raising money using your podcast, the Anchor app will allow you to set this up.

To get around not being able to include a transcript on Anchor, we created a page on our heritage website for the podcast, where there are links to YouTube, Anchor and the transcript.

The analytics on these apps are really useful. Therefore we know from Anchor that our podcast has been played 434 times since it began in July 2020. On YouTube, it got 758 views in total. It was great to discover that most of our listeners are female and aged 23-44. What a great surprise as we thought only older generations who know about our founder during WWII would find it interesting. iTunes gave us a five-star too, which I was thrilled about!

I always ask listeners if they have any burning questions about our history – so if you do have a question then please let me know as it might make a good podcast topic!