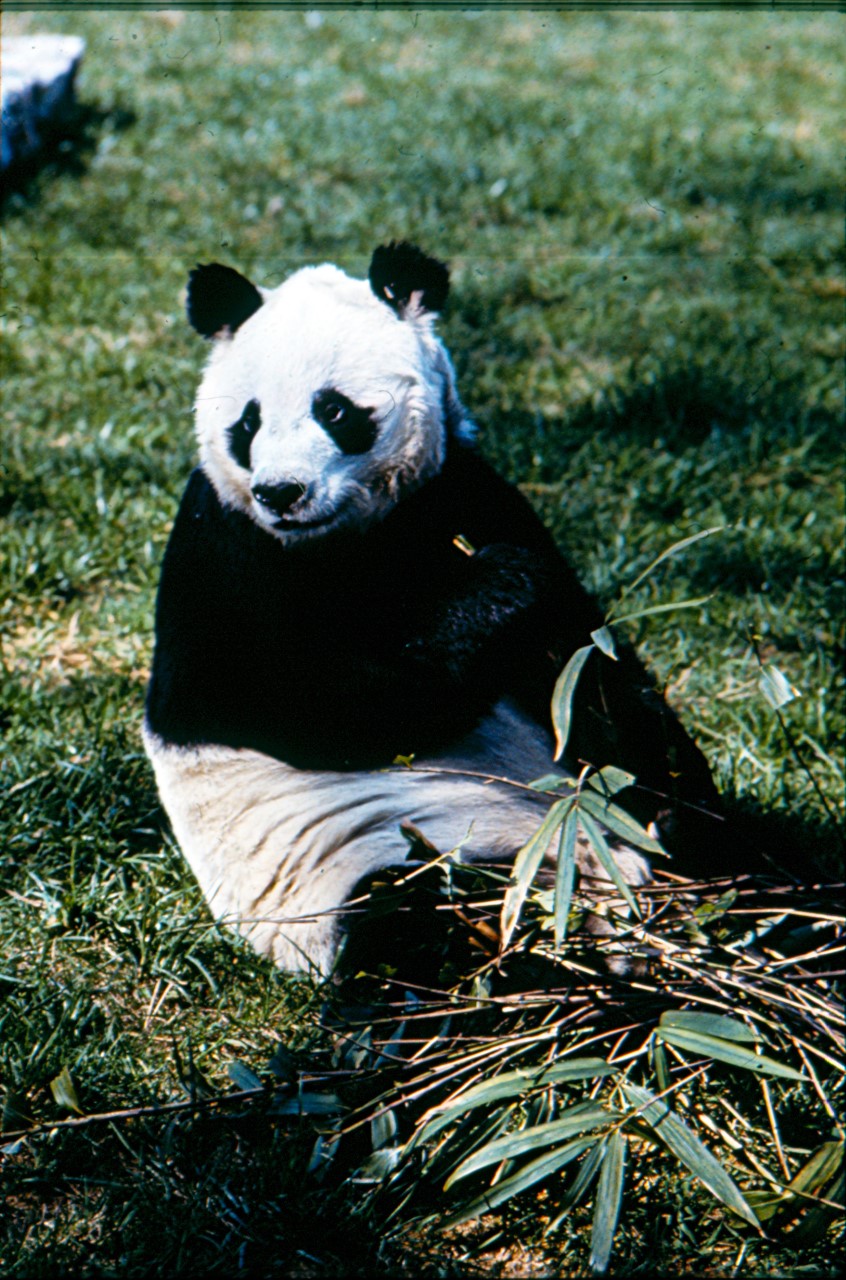 The Zoological Society of London (ZSL) has been home to some of the most famous animals in the world. To celebrate August’s Explore Your Archives theme of ‘Animals’, ZSL Library & Archives is going to share the stories of some of London Zoo’s most loved animals.

ZSL was founded in 1826 by Sir Stamford Raffles with the purpose of establishing a living collection of animals, an associated museum (no longer extant) and a library.

Guy the Gorilla came to ZSL London Zoo from the Zoo in Paris in exchange for a tiger. He arrived on 5 November 1947, Guy Fawkes Day, hence his name. He was just over a year old when he arrived, and was the first gorilla at ZSL London Zoo for six years. Over the years he became one of the most popular and loved animals in the history of the Zoo.

Brumas the Polar Bear was born in 1949 and she was the first baby polar bear to be successfully reared in Britain. She caused such interest that, in 1950, the Zoo’s annual attendance figures reached the 3 million mark. Although Brumas was female, the press had reported that the bear was a ‘he’ and the error was not corrected at the time, so the public thought the baby was male. Brumas was so popular that newsreels, books, postcards, toys and other souvenirs celebrated her fame.

Although not ZSL London Zoo’s first Giant Panda, Chi Chi became the Zoo’s star attraction and one of England’s best-loved Zoo animals. Chi Chi was acquired in 1958 and she was the first Zoo star to be promoted through television. When she grew older, attempts to mate her with the only other Giant Panda outside China, Moscow’s An-An, attracted international media interest and ensured her fame.

Goldie the Golden Eagle escaped ZSL London Zoo in 1965, and for over 11 days he flew from tree to tree in Regent’s Park. He appeared on television, in the press and people cheered wildly when he was mentioned in the House of Commons. Five thousand people caused traffic jams around Regent’s Park in an attempt to see Goldie. He was finally recaptured and returned to the Zoo.

Jumbo was born about 1861. In 1865 he was sent from Paris to ZSL London Zoo. On arrival he was in poor condition but after being placed in the care of Matthew Scott, a former antelope keeper, he flourished. A female African Elephant, Alice, arrived a few months later and the two elephants became associated in the public mind. Jumbo became a great favourite, largely because he had a very good nature. By the early 1880s, Jumbo was nearly 11 feet tall, and his legacy lived on with the word ‘Jumbo’ referring to something very large.

Obaysch was found near an island in the Nile, from which he took his name. He arrived in London in 1850 and became the first hippo to reach Europe since the days of the Roman Empire. Despite lacking the engaging appearance and nature normally associated with Zoo stars, he quickly became the rage in London. Queen Victoria inspected him shortly after his arrival. In 1854 a female, Adhela, joined him. In 1871 Obaysch fathered ZSL London Zoo’s first baby hippo. Sadly, it did not survive. In 1872, two more were born, and the second of these, named Guy Fawkes because of its birthday (although subsequently discovered to be female), became the first captive-bred hippo to be reared by its mother.

On 24th August 1914, en route to war in Europe, Lieutenant Harry Colebourn purchased a black bear cub at White River, Ontario. He called her Winnie after his hometown in Winnipeg. Lt. Colebourn took her with him to England, where his regiment was training. The bear became the pet of the soldiers and the mascot of the regiment.

She was left at ZSL London Zoo for safekeeping when the regiment went to fight in France. When the war ended, Lt. Colebourn donated Winnie to ZSL London Zoo in appreciation of the care that had been taken of her in those years, and in recognition that Winnie had become a great favourite with visitors. Winnie was said to have a remarkably good nature and the author A A Milne and his son Christopher were frequent visitors. As a result, Winnie the Pooh was named after her. A statue of Winnie was presented to ZSL London Zoo by the people of Manitoba on 19 July 1995.