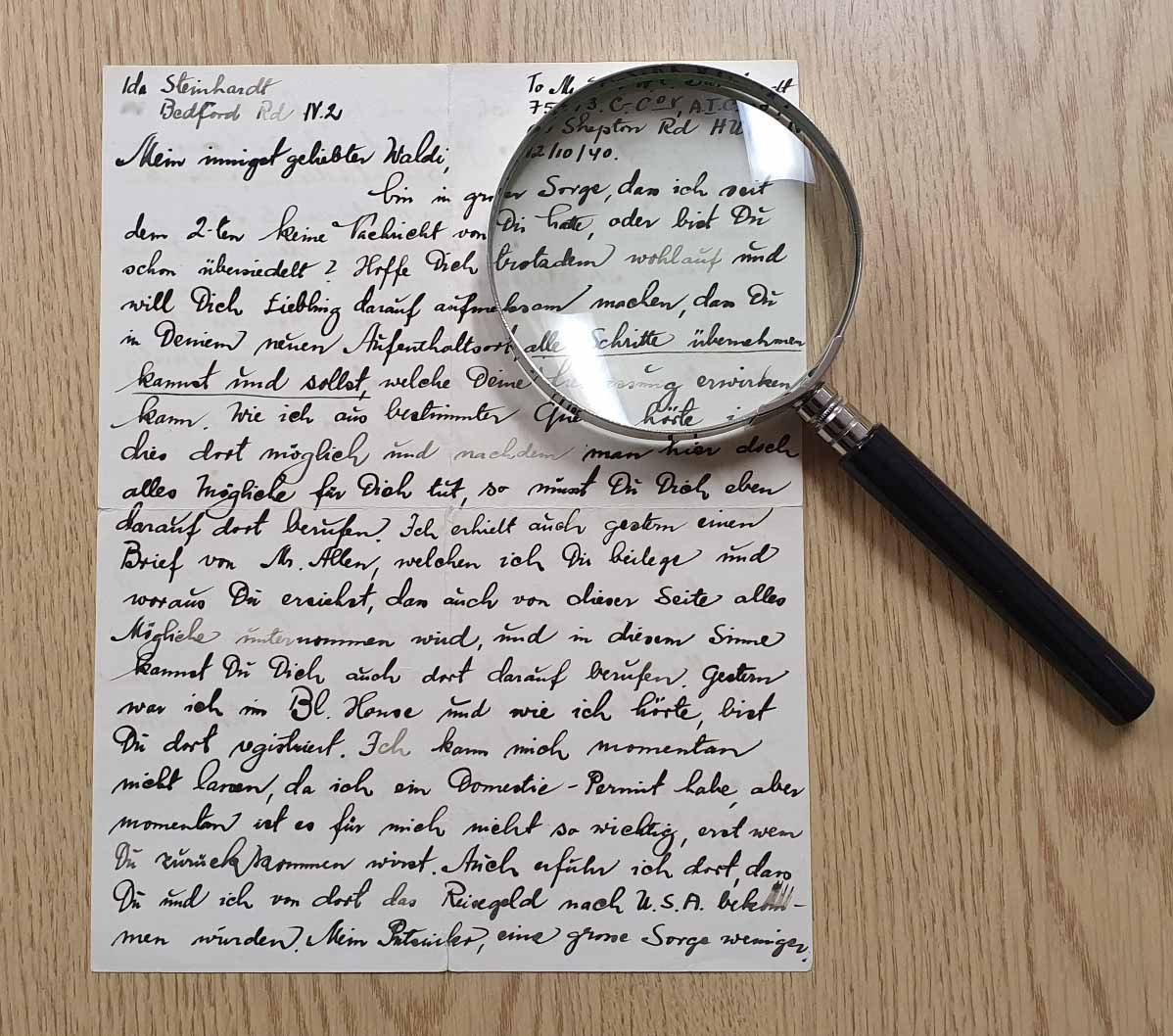 Letters From The Archive at the Knowsley Archives Service

Lin Rice at Knowsley Archives shares a collection from their mini-exhibition, ‘Letters from the Archive’. It is opened in the Kirkby Centre until April 2022.

Hidden in Knowsley’s Archive are personal collections that speak to the stories of real people. Photographs, diaries and scrap books give an insight into the personal lives of the people who created them.

Letters and correspondence can give us a whole new understanding of how people lived and experienced events around them.

One such letter opens a window to the experiences of internees held at Internment Camp 009 in Huyton during World War II. Huyton was one of 3 internment camps in the North West of England.

Woolfall Heath estate to serve as base for internment camp

Prior to the outbreak of war, Liverpool Corporation had started to build the Woolfall Heath estate. Unfinished properties on the estate were used as a base for the Internment Camp. On 10th May 1940, the Government ordered the arrest of so called ‘enemy aliens’. People of German, Austrian or later, Italian heritage – who could pose a potential threat to national security. The first internees – males aged 16-60 – arrived in Huyton on 17th May 1940. Individuals would then have to satisfy a tribunal that they weren’t spies or Nazi sympathisers.

One of the Internees was Ernst Waldemar Carl Steinhardt. Born 6th January 1906 in Berlin, he was a book seller by trade. The 1939 Register of England and Wales shows that he had been living at the Agricultural Training Camp for Refugees at Tyn-y-Cae, a refugee hostel in Brecknock, Brecon in Wales. A divorcee, he remarried in early 1940, to a local cook called Ida Strelinger, who was working at Glynderi House in Brecknock.

Newly- married life was interrupted by the imposition of internment. Ernst was at some point sent to Huyton and was allocated a house on Shepton Road. It was to this property that a letter, addressed to Mr. Ernst W.C. Steinhardt and dated 12th October 1940, was posted.

The letter found in the archive is from Ida

Ida’s letter is handwritten in German and beautifully scribed in black fountain pen on a cream-coloured paper and neatly folded into quarters. It begins: ‘My beloved Waldi…’

It was difficult for internees to contact the outside world.

We know from internee statements and historical texts that it was difficult for internees to contact the outside world. There was great anxiety around what was going on. The internees had limited knowledge of unfolding events and their families were trying to keep in touch with them. Ida’s letter bears this out. She is very anxious as she has no news from her husband since 2nd of September. She isn’t sure whether or not he has been moved to a new location.

She tries to reassure him that she is doing everything that she can to get him freed, and that he ‘…should be taking all possible steps…’ to secure his release too. She has been talking to people who may be able to influence the situation – she mentions a letter from a Mr Allen, a copy of which she had enclosed with the letter to Ernst, or as Ida calls him, Waldi. Unfortunately, we don’t have this letter, but according to Ida’s description, it contained information which would be both helpful and reassuring to the internee.

Ida has been researching next steps.

‘I have also discovered that you and I can get the money and travel to the USA. So that’s one less thing to worry about’.

She goes on to describe her own living conditions. She posted her letter from an address on Bedford Road, London N2, and Ida says: ‘At present I am staying where I am as Mr Segall is going on holiday tomorrow and I am staying in the house with Boby and a woman I am sharing with’.

In her beautifully handwritten letter to Ernst, Ida mentions her finances. She is going to apply for unemployment benefit in addition to petitioning for her husband’s release. Ernst’s absence has pushed her to think and act independently. She even says, ‘So as you can see darling, I’ve become very enterprising’.

At the time of writing her letter, Ida has been fasting for Yom Kippur and praying that Waldi will return to her. She feels isolated and is yearning for Ernst:

‘…All of our old friends have departed to the four corners of the world and there are only new faces in their place… Darling, stay healthy for me and hopefully all my prayers will be heard and one day you’ll be standing at my door, that would be the greatest gift of all for me. For today, countless kisses from someone pining for you… Your Ida’.

Ernst was finally released from internment on 26th November 1940.

To view this letter and others from Knowsley Archives’ collections, our mini-exhibition, ‘Letters from the Archive’ is open in the Kirkby Centre until April 2022.