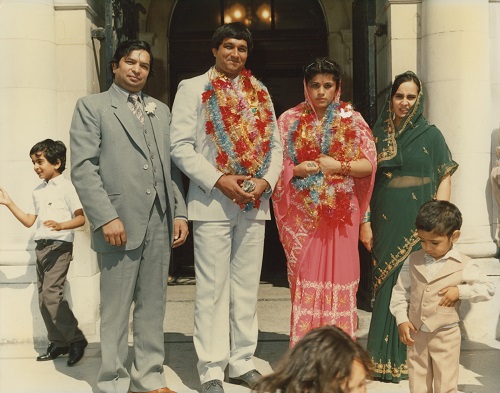 For this month’s ‘In Focus’ blog, Heidi McIntosh of Wolverhampton City Archives joins us to introduce the Apna Heritage Archive.

Working from home during lockdown has meant staff of Wolverhampton City Archives have been working away from the physical archival material. On the plus side, this has forced us to work more on our digital collections. One of these is the Apna Heritage Archive.

In 2016, Black Country Visual Arts (BCVA) received a grant from the Heritage Lottery Fund towards this project. The aim was to build up a collection of over 2000 historic photographs relating to Punjabi migration to Wolverhampton from 1960 to 1989, resulting in an exhibition at Wolverhampton Art Gallery. Not only did the project win the “Best New Group” award at the Community Archives and Heritage Group (CAHG) conference in 2017, it was also featured in the National Archives publication “A Year in Archives” the following year. The physical collection is now housed in a dedicated archive space at the Guru Teg Bahadur Gurdwara in Upper Villiers Street, Blakenhall. Children from a local primary school, where around 50% of the school population is of Punjabi origin, visited us and created their own school archive as a result. The digitised images have been deposited with Wolverhampton City Archives.

According to the 2011 census, over 30% of Wolverhampton’s population were of non-white or mixed ethnicity. Our role as Wolverhampton City Archives is to be fully representative of the communities that we serve, and we are a long way off that point at present. Collections such as the Apna Heritage Archive will move us towards redressing that balance.

The photographs themselves are wonderful. Whilst some of them document key life-changing moments and rites of passage, such as births and weddings, many of them show everyday life. Because of the time period covered, a large proportion are in colour, making them rich and vibrant and varied in their nature. There are posed school portrait photos alongside more relaxed shots of family groups on the sofa. There are photographs taken in Wolverhampton, but also of day trips and holidays, such as to Lichfield or London, as well as photographs of India.

There was some discussion as to whether we should weed these photographs – after all, as a general rule of thumb, we don’t usually collect people’s holiday snaps and family occasions, unless they are particularly significant individuals. However, that is partly what makes these so beautiful and interesting, as you get a real insight into the lives of the local Punjabi community. They have a wider relevance, too, as they are so evocative of that period in history.

These photographs are currently being added to our online catalogue. The ones that are completed are available to view here, and more will be added all the time: Apna Heritage Archive.

Applications are currently being taken for an AHRC-funded PhD project based around the collection – find out more here.